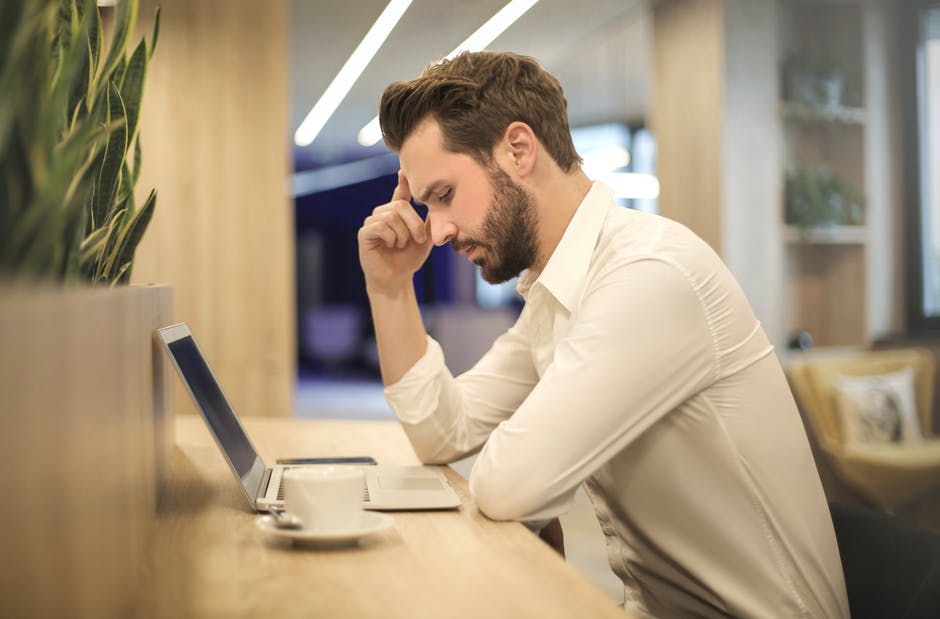 The above picture is of a man sitting at a desk with a laptop and a cup of coffee with his right hand on his head.

Some people with bipolar disorder turn to hobbies like painting, collecting, and writing, to ease symptoms. However, things might get a bit tougher when working with bipolar disorder in a career. There are a plethora of factors to consider in the workplace, and an unstable situation can sometimes result in a demotion or losing a position entirely.

So, if an interesting hobby can't help you deal with bipolar disorder symptoms at work, what can? There are a few approaches that might work to improve your situation. Of course, you should always consult with a medical professional before making any drastic changes to your lifestyle.

Getting enough sleep and finding some time for leisure are essential. But, there are a few more you might want to look at. If you're interested in a few strategies that might help deal with your symptoms at work, keep reading.

What is Bipolar Disorder

Bipolar disorder is hard to summarize and, sometimes, understand in its entirety. For starters, it's divided into three categories, numbered from 1 to 3. But, a quick rundown would involve mentioning a few of the primary signs of bipolar disorder, and the most apparent symptoms are common between all three iterations of the disorder.

You've likely heard about mood swings in people with bipolar disorder. These intense emotional states, also known as mood episodes, can shift a person's behavior and capacity to function drastically. This is commonly shown in manic, hypomanic, and depressive episodes.

From an objective standpoint, this makes it difficult for people to stay consistent and stable, especially in a work environment. This is because external factors can have a major impact on a bipolar person's behavior and mood. This includes stress, sleep habits, drug use, and interactions with others that can spark an episode.

Another one of the important signs of bipolar disorder refers to energy levels. Someone with this disorder might experience jumps in energy at random times during the day. This is often shortly followed by sudden drops in energy along with a shift to an irritable mood. These swings are characteristic because they shift so quickly from one extreme to another. Thus, one can imagine how difficult it can be for someone with bipolar disorder to deal with certain social environments.

The Struggles of Working With Bipolar Disorder

Many people tend to forget what a job usually is. It's the cumulation of years of work expressed in the form of a stable position that provides an income. When people think about working with bipolar disorder, they often leave out the effort put in prior to obtaining a job position.

Why might this be relevant? Well, it has everything to do with improving the capacity for a person to better interface with a work environment. If someone with bipolar disorder doesn't learn how to deal with, find the proper disability guidance, or treat their symptoms during earlier stages in their life, it'll pour into their career.

Recognizing that you don't currently have the tools to deal with bipolar disorder is the first step to finding them and solving any myriad of issues you might have. While easier said than done, the truth is, while bipolar disorder can be very difficult to deal with, it's possible to lead a normal life.

There are two common work struggles for people with bipolar disorder regarding working with others. The first problem is learning to deal with the stigma around the disorder. Others might put you in a box and judge you unfairly from the get-go. This can be debilitating and heavily impact your productivity.

The second common work struggle is learning to coordinate and articulate ideas with others. Emotions can get in the way of what some might call logical thinking. When making decisions, you might lean towards one due to either excitement or negative feelings regarding the other.

Interestingly enough, there's one approach that can help with both of these problems. That is, to imagine the situation and take note of what's influencing your emotions in the moment. It takes a lot of practice. Some turn to physical tools to help, like using a notebook to write things down and analyze them. Catching yourself in the moment can save you a lot of trouble when working with others.

Small steps are big steps when it comes to bipolar disorder. Accepting the fact that you have the capacity to swing from ice to fire in seconds means that any progress is admirable. So, consider making one small advancement every day or week. Minor changes can lead to immense results.

Some recommend regulating caffeine and sugar intake during the day. Perhaps you'll have to save your morning mug of coffee for after lunch and replace it with green tea. Short meditation sessions can also work wonders. The point is, take a closer look at the little details throughout your day and see if making any adjustments helps.

Learn to Think Things Through

Asking someone with bipolar disorder to think things through without emotion feels a bit pointless. It isn't, though. Uncontrollable emotional outbursts can lead to impulsivity, but there are ways to adjust your thinking process to slow or stop impulsive behavior. Meditation helps, but there are other mental exercises that can bring about great change.

External stimuli or inputs can start a chain reaction. So, you have to work on building a mental barrier between the external and internal. While this might sound silly to some, learning to view what happens on the outside as something separate can help immensely.

You Can Improve Your Bipolar Disorder Situation

Mental illness has only recently entered the scientific and social spotlight. Bipolar disorder falls under that umbrella, luckily, and new helpful information is appearing on a daily basis. For now, though, taking small steps, thinking things through, and building strategies to better engage with others are just a few ways to improve working with bipolar disorder.

Reach out right away if you're interested in finding employment that makes accommodations and keeps your bipolar disorder in mind, or if you want assistance with the job you have right now. We're here to help you find solutions.